When Is Three Kings Day Celebration

While other countries are gearing up for Christmas, most Puerto Ricans are probably looking forward to Three Kings Day. Puerto Rico does celebrate Christmas, but unlike with most European countries, their festivities don’t end on December 25. Instead, the parties continue almost non-stop all the way until January 6th when Three Kings Day draws the festivities to a close. 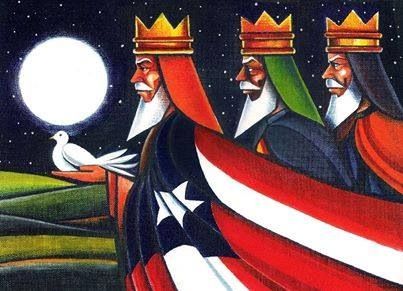 Three Kings Day, also known as El Dia de los Reyes in Spanish and Epiphany in other countries, is a long held Latin American tradition. It celebrates the gospel account relating to the visit of the three magi – or in this case kings – to the baby Jesus. According to Latin culture, January 6th saw three different men visiting Jesus – Melchor (representing Europe), Gaspar (representing Arabia) and Balthazar (representing Africa). The first is believed to have arrived by horse, the second by camel, and the third by elephant and they brought gifts of gold, frankincense and myrrh respectively. For young Puerto Ricans it is perhaps the most exciting and important day of the year, since it is on this day that they receive their presents. According to popular culture, the youths place a box filled with straw, grass or hay under their beds. This is a gesture of good will and is supposed to be used to feed the king’s horses while they rest as their owners make deliveries. If the child is good, he wakes up the next morning to find candies, sweets or toys in his box. If he was bad, he will only find a lump of dirt or charcoal. Apparently the tradition is much older than that of Santa’s visit on Christmas Eve and much of the proceedings are celebrated across the globe in a similar fashion.

Young adults, on the other hand, get ready to enjoy night upon night of revelries and fun. Their celebrations start straight after Christmas and continue until Three Kings Day in early January. In fact, the Dia de los Reyes party is the next big event on the calendar after Christmas, so a lot of planning goes into it to make sure it is a success. Shops have ceramic wise men, complete with camels that move a little closer to the manager scene with each passing day. The celebrations enjoyed in Puerto Rico continue pretty-much non-stop for two weeks as islanders celebrate each passing night in a different way. The colors, festivities and fun should not be missed out on, so if you can visit Puerto Rico around Christmas, make sure that you stay a few extra days and make the most of this wonderfully festive time of year.

In Mexico and numerous other Latin American nations, Santa Clause isn’t as famous as he is in the United States. Or maybe, it is the three insightful men who are the carriers of endowments and leave presents in or close to the shoes of little kids. The occasion is likewise known by the name Epiphany and goes back to the fourth century. A fantastic dining experience would be hung on this day to respect the event of Jesus’ submersion and to give recognition to the three savvy men.

Many accept puzzling occasions went before Jesus’ introduction to the world with maybe the most prominent being the presence of the star in Bethlehem. This new star showed up at night sky only preceding the appearance of Jesus. Three insightful men, or Magi as they were known, whose names were Caspar, Melchior, and Balthasar, headed out a far distance to give proper respect to Christ. They carried with them fine blessings of gold, frankincense, and myrrh.

Three Kings Day, or El Dia de Reyes, remains a significant occasion for Latin America. Notwithstanding blessing giving, there is additionally a culinary treat that is explicit to the occasion. Known as Rosca de Reyes (King’s Cake), this occasion treat is an emblematic cake. Formed in a hover to mean a lord’s crown, this sweet bread holds a unique astonishment. Inside is a little plastic puppet speaking to the infant Jesus. Whoever discovers this token is committed to have an impending gathering for the event Dia de la Condelaria (Candlemas Day) which happens every year on February 2.

How Three Kings Day Is Celebrated?

Three Kings Day is praised with various conventions and various names the world over. Investigate a portion of these festivals.

Puerto Rico Los Reyes: January 5.
Children fill a container with newly slice grass to put under their beds. A list of things to get is set on top for the Three Wise Men to fulfill.

Poland Szczodry wieczór: Evening of the Epiphany.
A plentiful night that closes with a terrific blowout — houses are set apart with the year and the initials of the Three Wise Men utilizing incense and chalk.

England Twelfth Night: January 6.
This is a period for cake, wassailing, and commonsense jokes.

Ireland Women’s: January 6.
Christmas Women get some merited rest and unwinding after all the difficult work and cooking of the Christmas season.

In its center, Three Kings Day is truth be told a banquet day. So it makes amazing since that on this day, families appreciate a major filling dinner. In Latin American nations, this dining experience is appreciated in the open air, outside. Conventional dishes incorporate dark beans and rice for certain families changing out the beans for peas or corn, soups and plates of mixed greens that highlight yucca, nopales, and plantains, and a moderate cooked meat sautéed with onions, garlic, and spices.

Ruler’s cake, Rosca de Reyes, is the feature of the Three Kings Day festivities. The cake is molded into an open circle, or wreath, and studded with candy-coated leafy foods to speak to the gems in the Magi’s crowns. The convention of the cake necessitates that a small child Jesus doll is covered up inside the cake. Whoever gets the presenting with the Baby Jesus should have February’s Candlemas festivity.

On January 5, the Three Kings are added to nativity enhancements and youngsters forget about their shoes over evening sitting tight for a little while from the savvy men. At the point when they get up in the first part of the day, they will find that the Kings have left them endowments inside and close to their shoes.

California’s Northgate Gonzalez Market sells around 60,000 Rosca de Reyes every year. They begin selling the first, little rosca not long prior to Thanksgiving. About seven days before Christmas, they sell the cakes in four sizes and two assortments: unique and filled. One year, the fillings comprised of guava and cheddar or pineapple and cajeta.

In 2019, gourmet experts from La Universidad Vizcaya de las Americas were granted the Guinness record for the longest Rosca de Reyes bread on the planet. Estimating at 2,065.43 meters, the extensive conventional bread beat the past world holder for the longest portion, which was Switzerland. Carlos Tapia of Guinness World Records for Latin America confirmed the length of the bread and its new world record, noticing that the past record held by Switzerland estimated in at 973.24 meters. The ring likewise included in excess of 7,000 dolls within the baked good.

Consistently in Mexico just before Three Kings Day, a mile-long Rosca de Reyes cake is made to praise the occasion. In excess of 200,000 individuals accumulate yearly in Zocalo Square to eat a bit of the King’s cake or take some home to put something aside for some other time. Beginning in 2018, Mexico City’s administration accentuated that a segment of the delicacy will be made without sugar so that individuals who need to dodge desserts are additionally ready to participate in the convention.

The Bible doesn’t determine the names or number of Magi who visited the infant Jesus.

Endowments of gold, pitch myrrh, and frankincense oil were given to Jesus, each serving representative significance.

Much the same as stockings are held tight Christmas for getting presents, youngsters fill their shoes with treats for the camels of the Three Wise Men and forget about them.

Get a “Rosca de Reyes”

The King Cake convention is alive in New Orleans just as across South America, and plans to make one are found reasonably effectively on the web. Envision a scrumptiously sweet cake with cinnamon and sweet sauce, with an assortment of fillings relying upon how wanton you’re feeling.

In case you will praise a Christian celebration, why not read the gospel it’s completely founded on. Twelfth evening (Epiphany) denotes the immersion of Jesus Christ by John the Baptist. “Epiphany” additionally signifies “indication” and commends the disclosure of God in human structure as Jesus Christ. Start at Matthew 2:11, and see what occurs.

Hop in some freezing cold water

In Prague, there’s a conventional Three Kings swim in the Vltava River. Individuals wear speedos, some of them wear crowns, and afterward they hop from a burst into the water. A short time later they drink thought about wine and eat delectable, warming Czech bites.

For what reason do we observed Three Kings Day?

Three Kings Day is viewed as the finish of Christmas festivities, speaking to the day the Three Wise Men offered presents to Jesus Christ.

What do they eat on Three Kings Day?

A customary Three Kings Day feast comprises of a starter of soup or plate of mixed greens, a fundamental course of picadillo meat with rice and beans (however a few families trade beans for corn or peas), and a King’s cake for dessert.