But, its origin and meaning seem to be a mystery for many visitors.

I’ve visited this door multiple times! And not only does it makes a great picture spot, but its meaning always inspires me.

In this article, I will tell you everything that you need to know about the Puerto Rican Black Flag Door:

What is the Puerto Rican Flag Door?

Initially, a group of artists painted the flag in 2012 with its original colors, red, white, and blue.

After the group Artistas Solidarixs en Resistencia painted the door’s flag in black in 2016, it gained more popularity. As a result, many curious visitors wonder about the meaning behind its colors.

Behind the door, there is a Spanish colonial structure in ruins, used mostly as storage.

Where is the door with the Puerto Rican flag located?

Below is a Google Map that shows the location of the black Puerto Rican flag door:

Learn more about the area in our article Old San Juan – All You Need To Know.

Is this a good place to visit for tourists?

The black flag door is a great place to visit if you’re strolling around in Old San Juan looking for picture-perfect spots.

The door itself is a mural, and besides taking pictures and admiring it, there isn’t anything else to do. 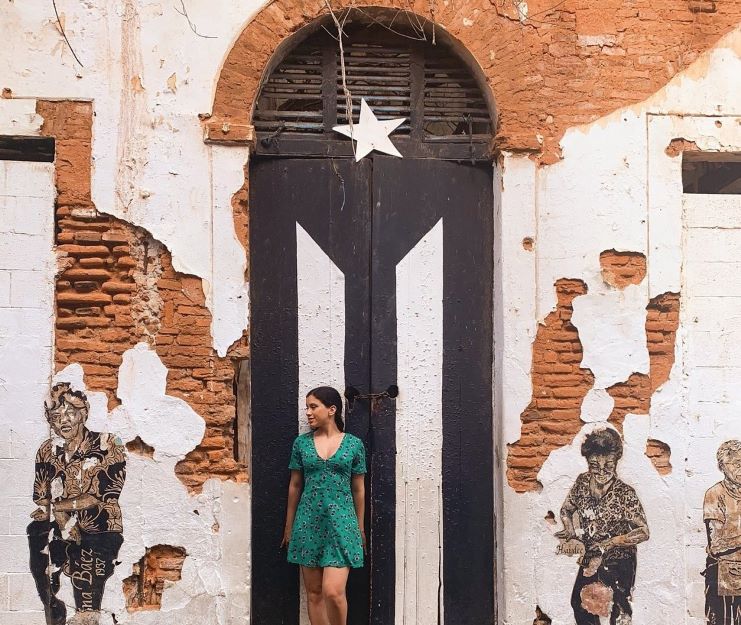 If you are interested in street art, taking pictures in trendy spots, or Puerto Rico’s history, then you can’t miss this stop.

If you don’t find any of these topics attractive, then skip this attraction and explore our article featuring the 40 Best Things To Do In San Juan.

Read our guide on the 72 Best Places To Take Pictures In Puerto Rico, to find other great photography destinations.

When was the black Puerto Rican flag made?

The black Puerto Rican flag door was painted on July 4th, 2016 by Artistas Solidarixs en Resistencia, as a protest against the PROMESA law, which established a Fiscal Control Board in Puerto Rico.

Before July 2016, the flag door had the original colors of the Puerto Rico flag.

The first flag mural was painted as part of the project Grabadores por Grabadores (Engravers for Engravers) back in 2012.

What does the black flag in Puerto Rico mean?

The black Puerto Rican flag door is a symbol of resistance and hope.

It was created by Artistas Solidarixs en Resistencia after the Fiscal Control Board created by the PROMESA law was imposed in Puerto Rico.

Changing the colors meant the death of democratic values and the three government branches, the Legislative Branch, the Executive Branch, and the Judicial Branch, represented in the flag’s triangle.

Below is a video with the declaration written by the group of artists that created the black flag door:

If you’re visiting Old San Juan, then visiting the Black Puerto Rican Flag Door is essential to get that “I was here” picture for your social media.

It’s the flag that motivated Puerto Ricans to use black flags as a symbol of resistance and protest in manifestations.

If you’re looking for more things to do during your Puerto Rico vacation, I recommend that you check out our article 45 Best Things To Do In Puerto Rico.

Writer at PuertoRico.com. I’m an avid traveler and freelance writer from Puerto Rico. I love the outdoors, coffee, hiking, and letters. When I’m not inside typing letters on my laptop, I’m out exploring the hidden treasures that Puerto Rico has to offer!

Find the best things to do
by interest